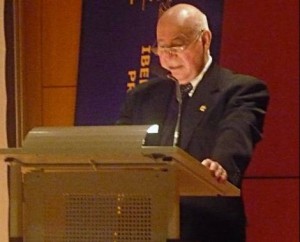 „ROSE’S DILEMMA“ AT THE ENGLISH THEATRE OF HAMBURG

Did Neil Simon really write this play? Up to now we only knew the very worldly and sunny side of his character. However, in his latest Broadway hit the “grand seigneur” of comedy surprises us with kind of a mystery play dealing with love and loyalty that outwit death. Amazing! Just think of witty plays such as “Barefoot in the Park”, starring Jane Fonda and Robert Redford, elegant “California Suite”, or the enchanting musical “Sweet Charity” with Shirley McLaine in the leading part – only to name a few comedies out of the author’s rich work. It seems as if Neil Simon, born in Brooklyn, New York, in 1927 has reached the age of wisdom. Let us hope that America’s most popular writer of comedy will continue to cheer us up with some new most entertaining plays in the future.

END_OF_DOCUMENT_TOKEN_TO_BE_REPLACED

“What a scandal – how shocking indeed!” This might have been the mildest criticism with regard to George Bernhard Shaw’s play about prostitution in Queen Victoria’s puritanical  Great Britain at the beginning of the 20th century. As it is, the play “Mrs Warren’s Profession”, written by the author in 1894, was staged in 1902 when the virtuous ruler – Queen of Great Britain and Ireland, Empress of India – had already been dead for a year. However, her high moral standards were still alive at all levels of society. What a cheek of a playwright – an Irishman at that – to stir up the hornet’s nest of dirt and prostitution which virtually did by no means exist at that time in the country. How daring! Anyway, under the severe theatre censorship of Her Majesty’s Lord Chamberlain the play was forbidden after its first performance. Later, when rules were a bit relaxed, Mrs Kitty Warren’s life as a “madam” of a string of brothels on the Continent became a great box-office success not only in Britain. END_OF_DOCUMENT_TOKEN_TO_BE_REPLACED

This hilarious play is a Christmas present for all spectators who appreciate the inborn British sense of humour. Britain boasts a great tradition in comedies. Just think of William Shakespeare, the world’s greatest dramatist ever, also known under the sobriquet “Swan of Stratford”, who not only wrote a number of tragedies, but also numerous, most entertaining comedies, such as “Twelfth Night”, “Winter’s Tale”, “The Merry Wives of Windsor” and, last but not least “The Comedy of Errors.” When referring to Patrick Cargill’s “Don’t misunderstand me”, the various errors and misunderstandings between Solinus, Luciana, Lucie, Angelo and the rest of the “set” ring a bell. You may argue that Shakespeare who died nearly four hundred years ago, wrote about his contemporaries’ problems, and that Cargill’s work (the author died in 1996, aged 77) has absolutely nothing to do with the plays that his famous colleague once wrote. However, this is a fatal error. Both comedies in question deal with one and the same subject – love. If you want to learn more about the errors and tribulations resulting from marital love and secret affairs, buy a ticket and abandon yourself to the pleasure of a most amusing  evening at the TET.

END_OF_DOCUMENT_TOKEN_TO_BE_REPLACED

The English Theatre of Hamburg is happy to announce its new play „Don’t misunderstand me“, written by the famous British actor and playwright Patrick Cargill. Premiere on Thursday 25 November, 2010, at 7.30 p.m. This light-hearted comedy about Charles, the nice middle-aged family man, who desperately tries to escape his short-lived affair with a young American girl, is most amusing. Perfect entertainment for the dead of winter!

We shall come back on the play after the premiere.

THE NEW “POLITICALLY INCORRECT” PLAY AT THE ENGLISH THEATRE OF HAMBURG

Before you say anything about racism in today’s United States of America, think twice! This is the message of Neil Labute’s play “This is how it goes.” Most of us naïve Europeans were of the opinion that racial prejudice between black and white Americans had long been abolished. We even thought that the New World could teach Europeans a lesson concerning racial harmony. However, Neil Labute boldly opens up old wounds und shows us that crude racism still lingers below the surface of Afro-Americans and white Americans alike.

The plot is set in small town America and deals with the repercussions of an interracial love triangle. Cheerleader Belinda, a pretty middle-class blonde, meets Cody, the star of the high school track team, falls in love with him and marries the black athlete. After school Cody starts a remarkable career as a successful businessman while Belinda stays at home with their two kids. Her life as stay-at-home mom and the delicate balance of her marriage with an Afro-American is troubled when a former high school friend – simply called “the man” in the play – turns up in town and rents the small apartment over the couple’s garage. “The man” comes up with embarrassing questions about who Belinda and Cody want to be, who they are and what made them that way. It soon becomes obvious that “the man” is deeply attracted by Belinda. This worries Cody who threatens to throw “the man” out of his house. END_OF_DOCUMENT_TOKEN_TO_BE_REPLACED

Rejoice! On September 9, 2010, the English Theatre of Hamburg will present its new premiere. “THIS IS HOW IT GOES” is the title of the play written by the famous American playwright Neil LaBute. It deals with such classic themes as prejudice, racism and – last but not least – bigotry. The topics of this gripping  play are the still existing problems and tensions between black and white citizens in today’s America. The author does not care in the least for political correctness and thus adds a funny note to his drama. Neil LaBute who is of French Canadian, English and Irish ancestry, writes plays for the theatre and, at the same time, boasts an impressive record as a filmmaker. For example … “The Wicker Man” was an American version of a British cult classic which starred famous actors like Nicolas Cage and Ellen Burstyn. A great British newspaper recently dubbed Neil LaBute “America’s misanthrope par excellence.” Let us put it this way: The author is absolutely free of any illusions and just calls a spade a spade.

Crime time at the English Theatre of Hamburg!

In the lobby the spectators are

greeted by a poster warning them not to catch a fright when confronted with the notorious
“smoking gun.” The explosion during the first act is indeed very impressive, the more so as one of the actors is shot dead and is lying in a pool of blood on the shining floor of Camille Dargus’s elegant Manhattan apartment. Come to that, this “youngish” lady is a famous jewelry designer with a preference for one-night-stands with attractive very young men. The night before, she had invited Billy, a handsome waiter, into her house.

Nothing unusual so far. However, when she wanted to get rid of him in the morning, he refused

to leave and turned out to be a  blackmailer who filmed their intimacies in her bedroom. Instead of getting hysterical, Camille kept a cool head und instantly called her security guard Ted to throw her unwelcome visitor out of her flat. From now on this very intricate story gains momentum.  It is very essential to listen very closely to every word exchanged between the actors on stage. Is Billy really dead and which role does the beefy Ted play in this murderous game? What happened to Camille’s rich husband who left her a fortune after his death? And what finally became of that mysterious son of hers? END_OF_DOCUMENT_TOKEN_TO_BE_REPLACED

By Dr. Wolf Tekook
Bankrupt of Lehman Brothers Bank in September 2008 marked the begin of a worldwide financial crisis. Stock price dropped at all emporiums, millions of employees lost their jobs. Governance of industrial states launched auxiliary programs to attenuate follow- up bankrupts. In Europe and North America they established massive support for car market by scrapping premium for old vehicles. Governments gave billions of dollars to banking companies in tilt, to prevent total collapse of financial markets and attenuate unemployment in industrial branches.
Middle class and freelancer didn’t benefit of state aid, however. In the following we will concentrate on buying behavior in art market. END_OF_DOCUMENT_TOKEN_TO_BE_REPLACED