THE NEW PLAY AT THE ENGLISH THEATRE OF HAMURG 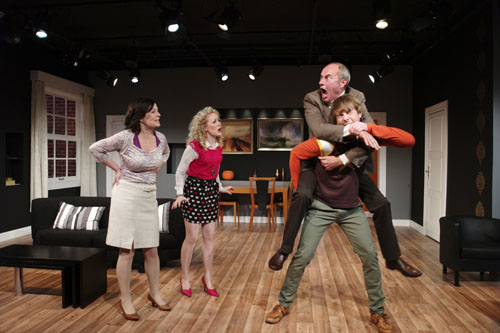 Hilarious! The new comedy by the famous British playwright Terence Frisby is heart-warming and thus just the right thing for a dark and rainy day in the dead of winter. In the very beginning nothing seems to be funny for middle-aged Rosie Boston who has just learned about her husband’s infidelity. Piers Boston, a 53 year old business-man has madly fallen in love with his young and pretty secretary Larissa. He is planning to begin a new life with her in the couple’s posh London apartment overlooking the River Thames. Selfish as Piers is, he does not even seem to expect any objections from his wife either to share her home with Larissa or to move out for good. While Rosie is brooding over her problem, help comes from young Darren Tucker who insists on talking to her. He turns out to be Larissa’s jilted husband who is terribly hurt at being rejected by his wife. While sipping a glass of champagne, Rosie and Darren plan to take an extraordinary revenge on their adulterous partners. First step of the plan: Warren moves in with Rosie. While she gets closer and closer to her young lover, Piers’ business goes bust making him a penniless man from one day to the other. Since he was self-employed, he is not on the dole and he therefore is not entitled to social welfare. What can he do at his advanced age?  Larissa’s unexpected pregnancy complicates the situation the more so as she is getting on his nerves with her chattering all day about “Bumpy” in her constantly swelling belly. And what’s more – Rosie is pregnant too by Darren! Being short of money, Rosie, Darren, Piers and Larissa now share the same apartment and by the time get used to each other. In the end, the quartet ends up to live together in another place in the outskirts of London. This most amusing play about marital infidelity mirrors some of today’s unusual social and sexual relationships.

The actors were no less than brilliant in their different parts. While Debbie Radcliffe and James Walmsley – both already well-known to the habitués of the English Theatre – play the estranged Boston couple with great passion, the “youngsters” Emily Eaves as Larissa and Chris Casey in the role of her revengeful husband give an impressive debut on the Hamburg stage.

Last but not least a few words about the British author Terence Frisby, a playwright much acclaimed in the world of comedy. Just remember his greatest success “There’s a Girl in my Soup” which toured the world from Berlin to Sydney and other places on our globe. The man wrote also a book entitled “Outrageous Fortune”, an autobiographical story about his fifteen years as a litigant in the High Court following his spectacularly awful divorce. Mr. Frisby knows all about marital life and “drama” from his own experience. And for this reason this play about love, infidelity, revenge and – yes – hatred is so authentic.

Next premiere on February 23, 2012: “The Comedy of Errors” by William Shakespeare