THE ENGLISH THEATRE OF HAMBURG CELEBRATES ITS 35TH ANNIVERSARY

BEWARE OF FOXES, LADIES – “THE FOX”, THE NEW PLAY BASED ON A NOVELLA BY D. H. LAWRENCE

What an error to believe that their life in the English countryside on their own farm would turn out to be easy going and even idyllic! Nellie March and Jill Banford, two young ladies and life-long friends, are totally frustrated. The villagers are gossiping about the women’s unconventional relationship and feel that their lifestyle is not acceptable to decent people. The play is set in the dead of winter in 1918, right after the First World War. The two girls’ farm is in a bad state, they are having trouble with their crops and their hens won’t lay.  And to crown it all, a fox living in the nearby woods has been pillaging their henhouse. 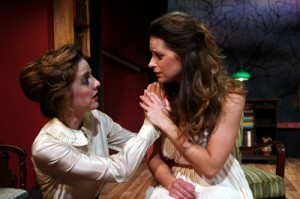 While Nellie and Jill are sitting by the fireplace in their cosy cottage, seeking for a solution to make ends meet, footsteps can be heard in the courtyard. A knock at the door, and in comes a young attractive man, clad in a soldier’s uniform. He introduces himself as Henry Grenfel and pretends that he has just returned from his camp in Canada. He knows the farm, since he used to live here with his grandfather, the former owner of the estate. The intruder offers his services in exchange for food and shelter. Further he promises to kill the fox and assist the two ladies in running the farm. While Jill falls for his charms and invites him to stay, Nellie wants Henry to leave immediately. In the end, she gives in to Jill’s wish, and Henry becomes a member of the household. This ménage à trois, however, very soon proves to be a disaster. 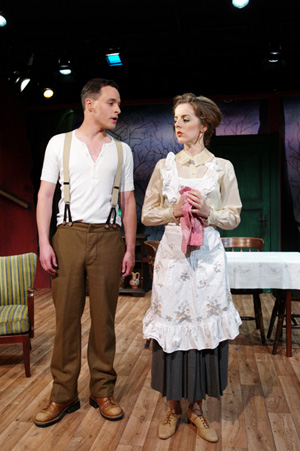 D. (David) H. (Herbert) Lawrence, one of the greatest English poets of the 20th century, was well known for his love of symbols. His novella “The Fox”, which he wrote in 1923, can be called a prize example of this. Henry who shoots the fox is a fox himself, a sly, calculating male, determined to stir up emotions and divide the two girl friends. Will he succeed in seducing Nellie,

The Author of the Play and the setting 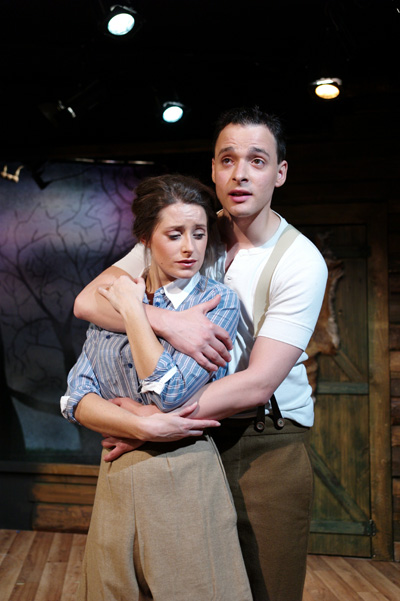 Thanks to Allan Miller, an American actor, director, teacher and writer in one, Lawrence’s novella was transformed into a drama fit for the great stages of the world. Since its first production in Los Angeles in 1981, and  one year later in New York, “The Fox” has been performed all over the United States, and has toured England and Australia. It has proved very popular around the globe and has thus been translated into a number of foreign languages, including Chinese.

As usual, the furnishing of the stage is completely in line with the period of the play. The living-room of the cottage is cosy and warmly lit, whereas the landscape with its bare trees shaken by a strong wind forebodes trouble. As usual, Geoff Humphrys’ lightning design is atmospheric and deserves praise.

These three young imports from England are amazingly mature and highly professional actors. Suzy Baston portrays Nellie March, the cool emancipated woman, with great intensity, and Kate Middleton (not to be confused with the Duchess of Cambridge) is convincing in the part of her vulnerable friend Jill Banford.  Adam Reeves as Henry strikes as the ideal “cock of the walk” in this disturbing ménage à trois – cunning, inscrutable und seductive.

“The Fox” is based. Lawrence lived from 1885 until 1930. He was born in central England as the son of a coal miner and heavy drinker. His childhood was dominated by poverty and friction between his parents. After studies at Nottingham University he worked as a clerk before he became a writer, and one of the greatest of his time at that. His oeuvre comprises poems, stories and novels, among them “The White Peacock”, “The Rainbow”, “Sons and Lovers”, not to forget  “Lady Chatterley’s Lover”, his most famous book which turned out to be a scandal since it was seen by his puritanical  contemporaries as sheer pornography. From Lawrence’s doctrine of sexual freedom arose obscenity trials, which had a deep effect on the relationship between literature and society. In 1912 he wrote: “What the blood feels, and believes, and says, is always true.” When Lawrence died of pneumonia on March 2, 1930, in the south of France, at the age of 45, he was appreciated as one of the greatest and most influential writers of his time.

Next Premiere: “FUNNY ABOUT LOVE ” by Terence Frisby on November 2011